This is a byline I never thought I’d see. My name hasn’t changed but instead I’m seeing what it would look like in Cyrillic for the first time.

I had my first article published in the Russian publication, Power & Sail Boat. After attending the Fort Lauderdale International Boat Show, I wrote about this year’s trends and future forecasting. Sunny weather brought the most attendees to the show in five years. Visitors were treated to exhibitors presenting not only their newest models but a few presented some of their oldest. For example, Hatteras presented its newest 100-foot raised pilothouse yacht next to its first yacht, Knit Wits. I wrote the article, and it was translated into Russian … including my byline. 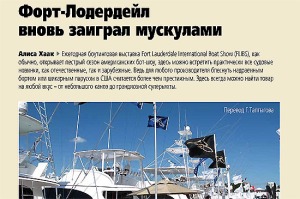 Power and Sail Boat was first launched in 1963. Now the magazine is published six times a year for Russia’s professional and weekend yachters. Though the publication has a smaller circulation than many U.S. yachting publications, Russia has a fervent yachting population, and this is my first foray into Russian publications.

This entry was posted in Uncategorized. Bookmark the permalink.